Why do Cats Love Boxes?

What is it with cats, crunchy plastic, and boxes?

If I crunch a plastic bag, my cat comes to investigate. He’ll even rise from a nap to see what’s going on. He doesn’t play with toys very much, unless I put them in a plastic bag. The sound of the bag makes him excited. The once boring orange ball becomes the most thrilling toy ever. He’ll pounce on it, bite it, and roll onto his back in order to thrash it with his back legs.


Why does the cat love crunchy plastic?

Did the addition of plastic make a difference? According to Muriel Beadle in the book, The Cat, “Its responsiveness to that rustling sound, however, had its origin in the noises made by prehistoric mice in burrows under surveillance by prehistoric cats.” So, my lazy cat, who won’t play with toys, jumps to attention with the addition of crinkly plastic because his instinct tells him it’s a mouse?

Apparently, the same instinct leads cats to explore boxes. In experiments by Paul Leyhausen, cats would attack mice in a hole, but ignore mice standing around in the same room.  Boxes, especially those with a small opening and a large chamber compel cats to investigate. I tried this on my cat. I put out a box. He came over and rubbed his face on the cardboard, but did nothing else. (Well, that's not entirely true. He looked up at me and meowed for me to pet him.) Thinking about the study, I folded the top of the box down to create a small, dark opening. Suddenly, his ears perked up and he had to paw at the hole to see what behind it.

Amazing, I thought. My cat has never seen a mouse in his life, yet he wants to look for one in the box.

Learn more about the White Cat Oracle at www.ScribbleFire.com 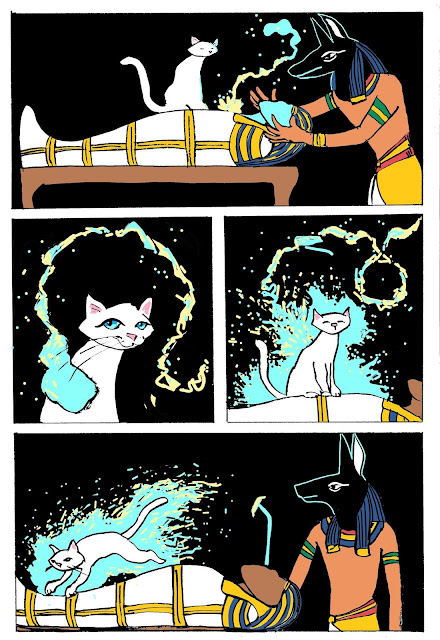 Adventure in the Reed Lands 2 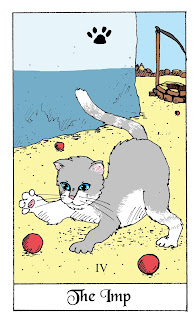 Are you Curious about the White Cat Oracle?